Discover the hidden gems of Europe and experience moments that recreate the wonder of years past.

Join us on our European river cruises for an all-inclusive journey taking you down some of the world's most famous waterways.

Take in some of the world's most famous waterways on our all-inclusive European river cruises. During a Scenic European river cruise, journey along the exquisite waterways which stretch across different countries with spectacular scenery revealing the hidden beauty of Europe. From breathtaking snow-capped mountains to lush valleys filled with vineyards, timeless villages and architectural treasures. View Gallery (6)
From the moment you step on board you'll be spoilt for choice. You'll enjoy the ultimate in all-inclusive luxury every moment of the day.

As soon as you step onboard our 5-star ships, you'll be spoilt for choice. Every moment of your day is filled with all-inclusive luxuries. Our luxury river cruising vessels are more akin to a gracious floating hotel. Your Cruise Director and every member of our hospitable onboard team, are on hand to ensure you enjoy every moment of your time with Scenic onboard your Space-Ship.

On arrival, all you need to think about is unpacking your luggage before settling into your 5-star luxury appointed suite. Lounge on your private Scenic Sun Lounge as you enjoy a glass of wine from your in-suite mini-bar. And when you feel hungry, your Personal Butler is on hand 24/7 to get you a delicious snack or meal.

Your Scenic Space-Ship has been designed with every amenity you could wish for including:

These are experiences that offer once-in-a-lifetime multi-sensory moments that are completely inaccessible to the ordinary traveller. Enjoy a gourmet dinner in a castle, followed by a classical concert, or one of our exclusively created Scenic shows in Salzburg.
View More

These are hand-selected activities for you to choose from and enjoy at a pace that suits you. Which narrow cobblestone path through an ancient village will you choose to follow? Will you Shop with a Chef at a local market, or explore the home of a local artist.
View More

Our Scenic Tailormade App guides you through your own personal excursion on shore, and offers absorbing commentary on major points of interest while you’re on board. Map out the perfect route for a fanatical foodie’s walk, or spend an afternoon exploring ancient treasures.
View more
*All beverages are included except a very small number of fine and vintage wines, Champagnes and spirits. ^At an additional cost Book your 2021 Europe River Cruise before 30 April 2020 and enjoy Flights Included on river cruises of 11 days or longer*.

Innovators in design and technology for luxury river cruising vessels, your Scenic Space-Ship will be your gracious floating hotel as you cruise the waterways of Europe.
Intimate and friendly, with every amenity you could wish for, our Scenic Space-Ships were designed with you in mind. From the moment you step on board you’ll be spoilt for choice. From our wide selection of dining options right down to your pillow menu, you’ll enjoy the ultimate in all-inclusive luxury, every moment of the day.
view more

Gems of the Danube with Prague
Prague to Budapest
Enjoy 3 nights in Prague as you explore the city with a local guide before you embark on a 7 day river cruise along the Danube from Nuremberg to Budapest.
Offers Available
Fly Free plus Save $1,058 per couple inc taxes Early payment discount per couple
Conditions apply
11 day
From (CAD)
$ 6,411
Discover

Prague & Gems of the Danube with Debbie Travis
Prague to Budapest
Enjoy 3 nights in Prague as you explore the city with a local guide before you embark on a 7 day river cruise along the Danube from Nuremberg to Budapest.
Offers Available
Save $1,128 per couple Early payment discount per couple
Conditions apply
11 day
From (CAD)
$ 6,726
Discover 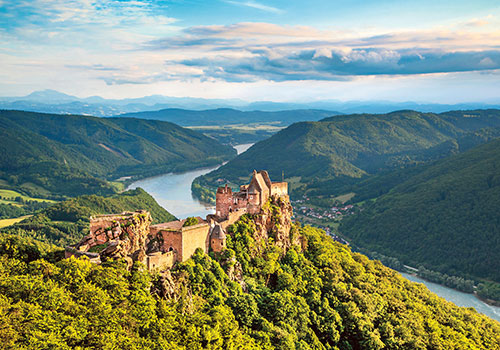 Join our 15-day Romantic Rhine & Moselle luxury river cruise and travel from Basel to Amsterdam. With medieval towns and picturesque sights, our spectacular luxury river cruise takes in the cities of Strasbourg, Mannheim, Cochem, Bernkastel and Antwerp.
The Rhine River is one of the longest rivers in Europe (1,232 km) with its source in the Swiss Alps. The Rhine River winds through the Principality of Liechtenstein, Austria, Germany, France and the Netherlands before reaching the North Sea at Rotterdam.
Scenic all-inclusive luxury Rhine River cruise journeys through the grandiose Rhine Gorge, a steep gorge highlighted by sensational vineyards and ancient castles. Cruising through the Middle Rhine Valley you'll be captivated by quaint villages, be in awe of rugged fortresses, and marvel at the remote chapels and craggy, steep vineyards.
The Moselle River is 547 kilometres long and is a main tributary of the romantic Rhine. It peacefully winds its way along one of Germany's most delightful river valleys between Trier and Koblenz. This fairy-tale Scenic luxury river cruise flows through France, Luxembourg and Germany where you will see beautiful river valleys, flourishing wine vineyards, medieval architecture and towns. The Moselle River is a stunning jewel in the European river cruising region as well as an important industrial waterway.
Famed for the wines and liquors produced in the valleys along the river, Moselle’s characteristic drop is the Riesling. The Moselle Valley Riesling grape is influenced by the terrain of the region and is considered to be the best in Europe. Join Scenic's European Luxury river cruise on an 8-day round trip along the picturesque Douro Valley in 5-star luxury on this 8-day round trip from Porto. Boarding the luxurious Scenic Azure in Porto, you'll settle into your lavishly appointed suite and marvel as the Douro River winds through towns that time has preserved. From the vineyards that elegantly grow alongside the Douro River to towns including Lamego, Regua and Vega de Terron. Get exclusive access to Provesende, a whimsical village where you'll meet the locals and get insights into how they live. 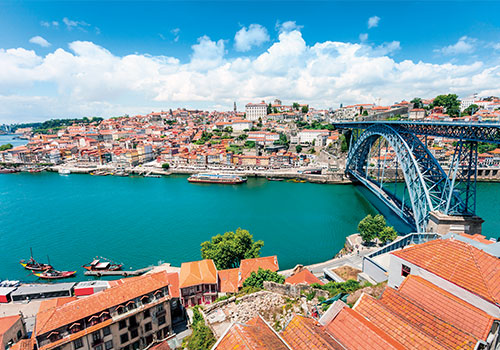 A day in the life of Europe river cruising 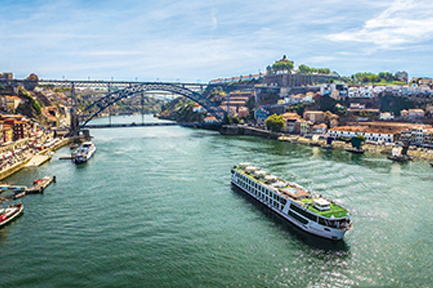 From exploring Europe's charming towns to feasting on local delicacies, here's an overview of what to expect on your next European river cruise.
Read more

New to river cruising? Read our 'First Time Guide to River Cruising' to inspire you on why you should embark on a European river cruise with Scenic.
Read now
View our brochure, call our experts or contact your local Scenic Travel Advisor to learn more

We also cruise to...