Cheers to Champagne: How this Sparkling Wine Became the Go-To Beverage for Celebrations

Whether you’re toasting a wedding, celebrating your anniversary or making a special day even more memorable, Champagne is likely to be your beverage of choice.
Champagne is synonymous with celebration, just like a Scenic Europe river cruise. Let us take you deeper into the story of this unique French beverage and the ways you can enjoy it on board your luxurious 5-star Scenic Space-Ship.

Whilst most of us love, Champagne, did you know there are strict rules around how it’s made? Only a select few sparkling wines get the honour of being called a Champagne.
First up, the wine has to be made in the Champagne region of France, in the northeast of the country. Next, it can only be made from specific types of grapes — most of the time that’s Pinot Noir, Pinot Meunier and Chardonnay. To ensure consistently high quality, the entire process, from grape pressing to fermentation, is tightly regulated.
But the result is worth it: a crisp, light, bubbling glass of Champagne that’s central to toasting a special occasion. 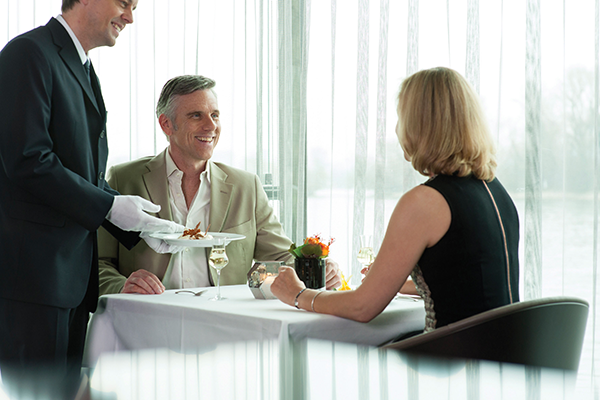 How the French Taught the World to Celebrate with Champagne

In 496AD, Clovis was baptised and named the first king of the Franks. This all took place in Reims, in the capital of the Champagne region, and the ‘Champagne’ wines were used to mark the occasion.
From around the 9th century, all kings of France were crowned in Reims. During these crowning ceremonies, Champagne wines were used in celebrations, and the wine has been associated with luxury, sophistication and special occasions ever since.
In fact, in 1790, France held a festival — called the Fête de la Fédération — to honour the French Revolution and it’s said that Champagne was the only wine served to celebrate. Champagne soon spread around the world, becoming the drink of choice for everyone from royalty to the rich and famous.
Champagne makers — the biggest of which are called Champagne Houses — have been making the sparkling wine to their exacting standards for generations. And nowadays, the world follows in the footsteps of French kings, using Champagne to celebrate big life moments and accomplishments, or simply to toast to a day well spent. Celebrate with Champagne on a Scenic River Cruise

Do as the French and toast with Champagne. Whether you’re celebrating a special occasion or rediscovering your love of travel, a 5-star luxury river cruise through the waterways of Europe is the way to do it – and enjoying a glass or two of Champagne makes the experience even more memorable.
On board a Scenic Space-Ship, you can enjoy Champagne Drappier Carte D’Or — which has been made by the same family in Urville, Champagne, since 1808.  Discover the depth of flavours alone in a flute or in one of our cocktails, like the classic crème de cassis.
Begin your evening of fine dining in Crystal Dining or L’Amour with a glass of Champagne in hand. Toast to the trip of a lifetime in the Panorama Lounge and Bar after a day discovering France’s most fascinating locations. Or relax in the Vitality Pool*, in your suite or Scenic Sun Lounge as the sun sets and your butler pours you a glass of Champagne. Onshore, the celebrations continue. Be immersed in the magic of your destination during a Scenic Enrich classical concert at Avignon’s Palais de Papes and Medoc’s Chateau d’Agassac with a glass of Champagne in hand. In Bordeaux, surround yourself with iconic art at the world’s largest digital art installation of Les Bassins des Lumières.

*Not available on all Space-Ships.
NOTE: Champagnes on board Space-Ships are subject to change and may differ from those depicted in this blog.

Inside the Immersive French Museum Dedicated to Viniculture

Deepen your understanding and appreciation of wine at this state-of-the-art, fully immersive and sensory wine museum in the heart of Bordeaux, France.

Indulge your passion for world-class cuisine and rich history with a 5-star luxury Europe river cruise through the most beautiful regions of France.

Discover the Wonder Beyond

Book now for 2023 and choose from our Super Earlybird and Earlybird Offers. Learn more about these offers today.