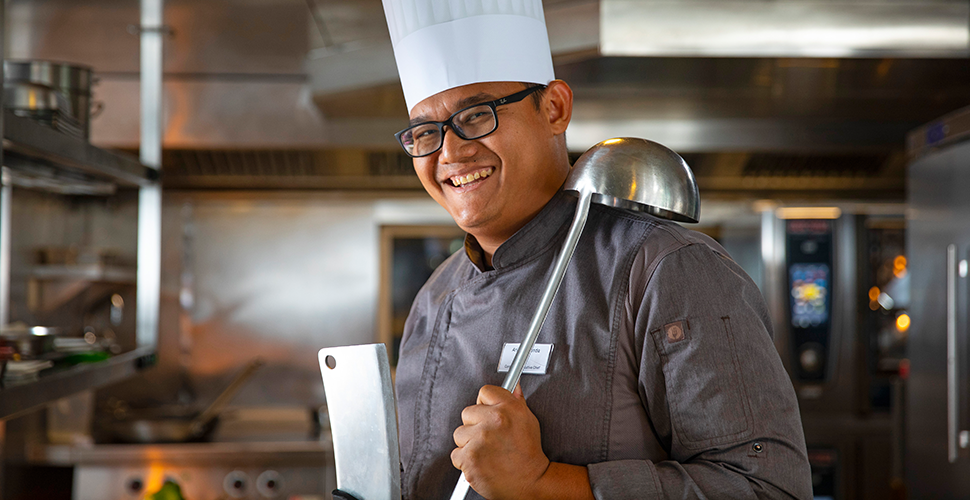 From Scenic Culinaire to your dinner table: Chef Ario Prananda

Scenic Corporate Executive Chef Ario Prananda shares recipes of his cherished dishes.
The motivations to travel to historic and cultural places are many. Some travel to soak up the art and culture of a destination; others gravitate towards its natural beauty. However, the one thing that is common to every traveller is the allure of a delicious meal. On a Scenic river cruise, a authentic culinary experience is more than just the culmination of your journey. It is an everyday affair.
Scenic Space-Ships in Bordeaux and the South of France even feature a bespoke cooking school, Scenic Culinaire, so you can look forward to exclusive on board cooking lessons featuring regional recipes and ingredients from local markets.
Get a taste of all the deliciousness that await you on our 5-star luxury Europe river cruises by creating some of the most popular dishes on board with these fabulous recipes from our star chef Ario Prananda.

After completing his education in cookery in Indonesia, Scenic’s Corporate Executive Chef Ario Prananda went on to work at some of the finest restaurants around the world, including Michelin-starred Restaurant Tantris in Munich.

Having served on Scenic’s Asia as well as Europe river cruises, Chef Ario’s passion for his craft is evident in the succulence of his much-loved dishes. 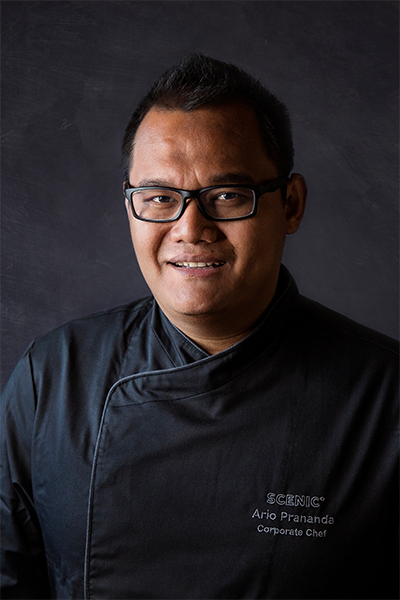 Custard, vanilla sauce, fresh berries
Chef’s notes:
“A few bowls, a mixer, a short ingredients’ list, it is so easy to make and forms three different layers once baked! Mindlessly easy, goofproof, and coconut lovers will love this magic tart.

This Coconut Tart is a simple recipe handed down to me by my great grandmother and I am passing it on to all of you. We call it the best ever ’round these parts.” Olive beignet
Chef’s notes:
“Fresh and simple best defines our style of cooking.  When I’m pondering what to make for dinner, I look for dishes that look pretty, have a nutritional benefit, and take little time or effort to make.  Salade Niçoise (knee-swahz) is a classic example of making a harmonious dish by building on flavours, using fresh ingredients, and presenting it in a way that looks sumptuous and colourful.” Breaded veal escalope, potato salad, fried parsley, cranberry jam and lemon wedge
Chef’s notes:
“The Wiener Schnitzel is the national dish of Austria. The designation “Wiener Schnitzel” first appeared in the end of the 19th century. The idea of tenderising a piece of tough meat by pounding it is evident in the oldest relics of the history of man. However, the Romans left evidence of refinement of a thin slice of meat dredged in breading and fried in the 1st century BC by Apicus. A popular variation is made with pork instead of veal, because pork is cheaper than veal (usually about half the price). To avoid mixing up different products, the Austrian and German food committees have decided that a “Wiener Schnitzel” must be made of veal.
The breadcrumbs must not be pressed into the meat, so that they stay dry and can be "souffléd". Finally, the schnitzel is fried in a good proportion of lard or clarified butter at a temperature from 160 to 170 °C until golden colour.” 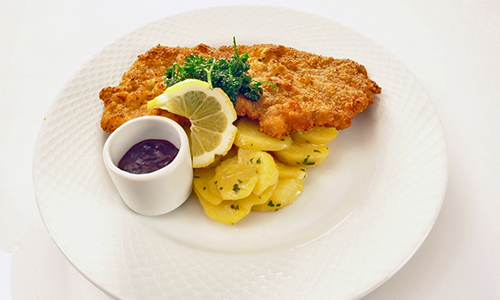 We invite you to take a closer look at your next adventure by requesting one of our free digital brochures.