Five Remarkable Highlights on an Ultra-luxury Cruise to Japan

From ancient Buddhist shrines to neon-lit skyscrapers and snow-capped mountains, there are so many contrasts and unique experiences in Japan. With Scenic, you will explore this unique and diverse country in truly all-inclusive 6-star luxury. Here are five highlights guests can look forward to on a Scenic Eclipse Discovery Voyage.

What was once a small castle town is now one of the world’s most populous metropolis, with over 13 million residents. As your Discovery Yacht docks in Tokyo, join a Scenic Freechoice excursion to visit the Shinto Meiji Shrine, or escape the bustle of the city in Shinjuku-Gyoen, one of Tokyo’s largest parks. Learn about Japan’s Shinto religion during an exclusive Scenic Enrich experience featuring a saké Kagami Biraki ceremony at a local shrine.
Learn new culinary skills by doing a sushi making class, or let the professionals take the lead and delight you at Sushi @ Koko’s on board Scenic Eclipse. Relax at the saké bar or indulge in a private dining experience at the Night Market @ Koko’s with its teppanyaki grill and Asian night market-inspired recipes.
Experience this on the Iconic Japan: Sacred Cultures & Nature voyage.

About 140 kilometres south of Tokyo, you’ll find Shimizu, known as one of the most beautiful ports in Japan. With its views of snow-capped Mount Fuji and a 7-kilometre line of pine trees stretching along the coast, it’s easy to see why.

Experience this on the Iconic Japan: Sacred Cultures & Nature voyage.

A new addition to the Scenic Eclipse itineraries, the city of Sakaiminato is found in the Tottori Prefecture in the south of Japan.
A Scenic Freechoice excursion will take you to Mount Daisen, also known as “mini Fuji,” or to Grand Shrine of Izumo, thought of as the oldest shrine in Japan. Although no one knows when it was built, records show it was already in existence by the early 700s.
Alternatively, join a city tour to learn about manga and spot famous characters from the GeGeGe no Kitaro comics dotted around the city. The comic’s author was from Sakaiminato.
Experience this on the Cultural Wonders of Japan voyage.

Hiroshima is known around the world for its tragic wartime history. The Peace Memorial Park is a 120,000-square-metre area that was once a busy hub of the city before being impacted by the devasting events. It now houses a museum and the Atomic Bomb Dome, one of the few surviving buildings in the area.

Outside the city, visit the island of Miyajima and the Itsukushima Shrine with its torii gate that looks like it’s floating on water.

Experience this on the Japan: A Journey Through Time voyage.

Sado Island sits off the coast of the Niigata Prefecture on Japan’s west coast. Key sights include the tarai-bune boats, which were originally made from wash tubs, and the crested ibis, or toki waterbird. Once extinct in Japan, it’s now been successfully reintroduced into the wild.

Pick from Scenic Freechoice excursions that take you to the sleepy port town of Ogi or to Sado Kinzan to learn about the largest gold mine in Japan.

Experience this on the Cultural Wonders of Japan voyage.

As well as docking in Japan’s unmissable destinations, on a Scenic Eclipse voyage you will discover the intricacies of the country’s culture and history with your expert Discovery Team made up of 15 dedicated experts.

Plus, after a day of exploring, you can unwind in one of the nine bars and lounges, enjoy a treatment in the 550m2 Senses Spa or relax on your private verandah, with your butler serving your favourite drink. 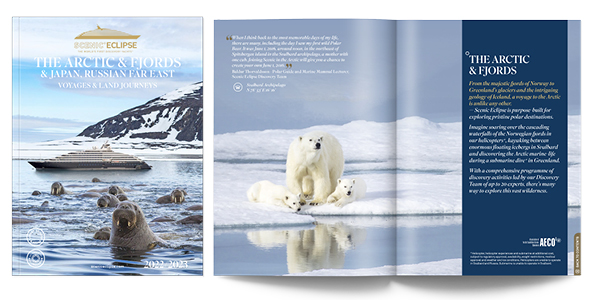