Even if you’re not an art enthusiast, Claude Monet’s paintings are familiar to everyone. His charming nature and garden scenes have captured the imagination of people all over the world. Visiting the artist’s house in Giverny, France is like stepping straight into one of his famous paintings. You’ll witness the iconic lily ponds and wildflowers that were immortalised by this great master of art – an experience that is truly awe-inspiring and one you will cherish forever.
Learn more about Claude Monet and the origin of the Impressionist art movement, before taking a stroll through this living masterpiece as part of our Normandy & Gems of the Seine river cruise.

Revolutionising the world of impressionism

Thanks to Monet’s famed cottage and garden, Giverny has become a popular place to visit in France. After Monet acquired the property in the late 19th century, the surrounding scenes soon became the crucial theme of his paintings. These magnificent portrayals of pastoral French life with their visible brush strokes became the hallmarks of the Impressionism art movement.
For four decades from 1883, Monet painted the world around him, which was something of a novel concept during this period. Ordinarily, the renowned artists of the era were trained to study their subjects within highly contained and regulated indoor environments where lighting was expertly controlled. Choosing to create his masterpieces in the outdoors was uncommon, leading to Monet’s work being initially disregarded. The Frenchman chose an ‘unusual’ style for creating artwork, daring to break away from tradition.
The artist began leading outdoor painting tours into the surrounding countryside of his home, pushing the boundaries of the current art scene even further. He encouraged other artists to follow in his footsteps and interpret the world in this different light, one which didn’t require you to faithfully record realism on canvas. 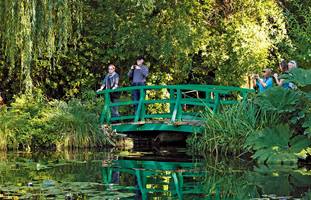 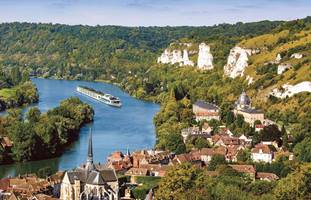 Monet’s home in Giverny has an important place in the history of art. Known originally as the House of  the Cider-Press – which indicates its former purpose – Monet’s house and gardens are today a true treasure, whether you are a fan of Impressionism art or not. Visiting his former home and taking a stroll through the gardens is an enjoyable experience in itself.
After the many years of dedication to his garden (and art), it is fitting that Giverny has now become a flowering monument to Monet. In 1883 Monet and his family settled into the farmhouse, calling Giverny home for more than 40 years. The family chose to travel less and less with each passing year; instead, Monet worked on a vast landscaping project of the garden, creating the space that is so cherished and famed today.
He transformed the garden into his own personal paradise, complete with a Japanese garden and a pond full of floating lilies, inspired by tranquil scenes from the Japanese prints he liked to collect. The pond he created by diverting a river, before planting willows and bamboo and building the iconic wooden footbridge. These original features have since grown wild with meandering foliage, wisteria and an endless stream of waterlilies. Monet painted this serene scene at different times of the day and year, leading to many of his chefs-d'oeuvre.
In the later years of his life, Monet became increasingly absorbed in depicting the world around him in Giverny. As his artistic vision expanded though, he began to paint smaller details on bigger canvases. These paintings paved the way for modern abstract art.
Since his demise, the nonprofit organisation, Foundation Claude Monet, has worked to preserve Monet’s house and gardens. The Giverny home welcomes 500,000 visitors each year and is the second most visited tourist site in Normandy, after the Mont Saint-Michel.

Today, the house is still wonderfully charming and ablaze with colour. Inside, the deep blue decor of the sitting room is a contrast to the sunny yellows of the dining room. The gardens are also a haven of colour, with the lily pads and wildflowers still offering a serene sight.
As part of our Normandy & Gems of the Seine river cruise, you can explore Monet’s renowned house and gardens. Pay homage to the great master of art during this Scenic Freechoice activity. For those seeking a more active excursion, you can also choose a self-guided cycling tour through Vernon to Giverny, along with the opportunity to visit Monet’s garden. If you are feeling particularly inspired and creative after your visit, you can continue the experience by joining a painting class on board your Scenic Space-Ship.
Our France river cruise will take you to a wealth of charming locations, including Paris and the picture-perfect port city of Honfleur (another muse of Monet). In Vernon, you will have the once-in-a-lifetime opportunity to attend a classical concert set within the opulent interiors of the 18th-century Château de La Roche-Guyon, as part of our exclusive Scenic Enrich programme.
Few places inspire true wonder and discovery quite like France. From the romantic capital city of Paris to the culinary delights of Provence in the south and the wine region of Bordeaux, ignite your senses and embark on an experience like never before with Scenic. For more information about our complete collection of France river cruises, take a look at our itineraries online or call us today on 1 866 689 8611.