Welcome to beautiful Lyon, a city which showcases the very best in art, gastronomy and history on the banks of the Rhône

Straddling the confluence of the rivers Rhône and Saône in the Rhône-Alpes region of France, the city of Lyon has long been an important destination thanks to its location between Paris and Marseille, a fact reflected in its illustrious history and heritage. Despite its size (Lyon is the third-largest city in France behind Paris and Marseille), much of the city is a UNESCO designated World Heritage Site, and boasts innumerable cultural sights — from ancient cathedrals to fascinating Roman-age heritage spots.

And yet, history and heritage aren’t the only things on offer in France’s so-called culinary capital. In 1935, celebrated food critic Curnonsky heralded Lyon as the ‘world capital of gastronomy’ on account of its simple, quality cuisine; and it seems he wasn’t wrong. Over a quarter of a century on, the city is still considered the gastronomic core of the European continent, trumping even Paris in terms of sheer palatability.

For those visiting Lyon for the first, second or sixth time, the progressive nature of the city means there are always new things to see and exciting new dishes to savour — however whistle-stop your tour may prove to be.

From medieval cathedrals to Renaissance mansions, Lyon is a hotbed of contrasting architectural styles. Here, we take a look at some of the must-see buildings in the city.

Looming imposingly over the city, the Basilica of Notre-Dame de Fourvière echoes the architectural prominence of Paris’ Sacré-Cœur Basilica, but is, in many ways, more dramatic. To enjoy an up-close aspect of this fine structure, and enjoy the rich tapestries held within, make for the Vieux Lyon metro station and take the Funicular to the summit — where exquisite vistas of the city below await. Designed by architects Pierre Bossan and Sainte-Marie Perrin, the basilica was built in 1872 thanks to a public subscription, being consecrated in 1896. Today, the building is registered as a UNESCO World Heritage Site, and is one of the foremost vestiges of the Rhône passage. 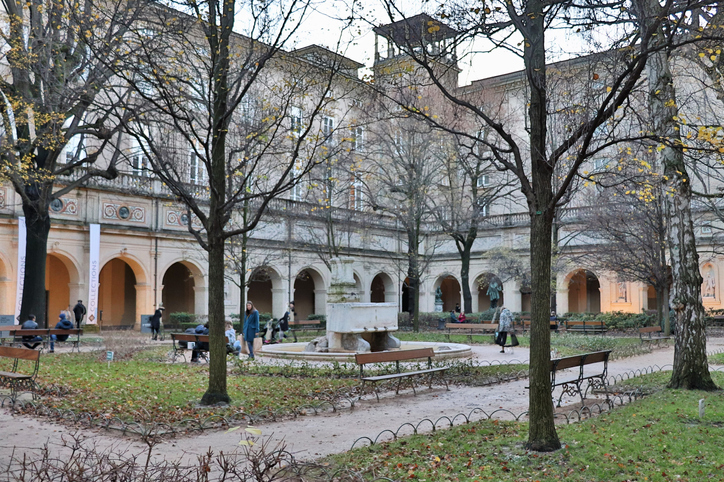 Lauded as the finest museum in France after the iconic Louvre, Musée des Beaux-Arts is an essential cultural stop-off for those with a keen interest in history and art, with one of Europe’s largest collections of artifacts and works from antiquity to the present day. The museum is housed in the 17th-century Palais Saint-Pierre in the centre of Lyon, which once served as a Benedictine convent. The building alone is magnificent and well worth visiting even if you have no plans to enter the museum, its imposing facade listed among the most iconic features of Lyon’s UNESCO World Heritage Site.

Don’t let the outlandish architecture of Lyon’s Musée des Confluences put you off; contained within are some of France’s most important artifacts from the fields of natural science and anthropology, as well as several exhibits dedicated to ancient arts and crafts. The museum is located in the 2nd arrondissement of the city, and is worth a visit for its ultra-modern, deconstructivist architectural design alone. An antidote to Lyon’s austere Gothic, Renaissance and Romanesque architecture, the museum is contained within an extraordinary structure of metal and glass, which seems to perfectly juxtapose the natural artifacts contained within.

For old-world atmosphere and charm beyond compare, make for the Quartier Saint-Jean, Lyon’s enchanting old town quarter. Located to the north of the city’s main cathedral, this medieval enclave is all cobblestone streets and ancient architecture, with every turn bringing new possibilities in which to raise your camera. One of the best-loved streets within the district is the Rue du Boeuf, leading to the Place Neuve Saint-Jean – a beautiful square flanked by traditional Lyonnaise restaurants, or ‘bouchons’ as they’re famously known.

Given its historic and gastronomic pre-eminence, it’s small wonder Lyon is home to such a glut of cultural wonders. Here we explore but a handful of the city’s most esteemed cultural must-sees. 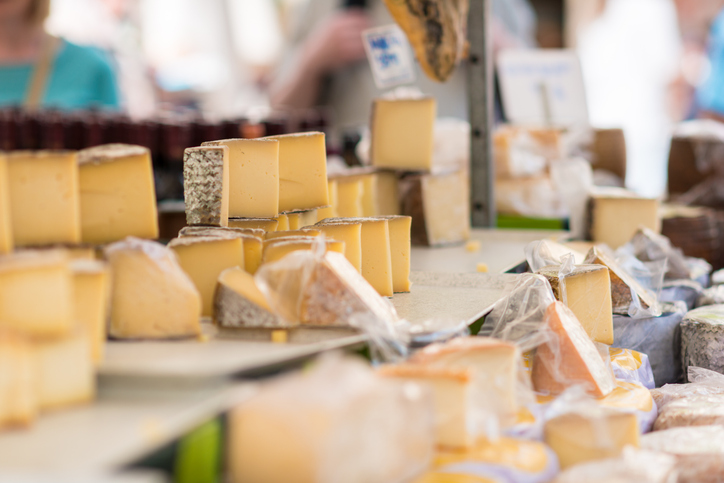 If Lyon’s fabled gastronomy interests you, Les Halles de Lyon ought to be your first port of call upon arrival in the city. Les Halles is essentially a vast indoor food market, where the city’s restaurateurs flock to fill their larders with culinary treats from across the region. Tasting is encouraged throughout the market, so you can sample the true taste of Lyon in one fell swoop. Those with a penchant for Lyonnaise cuisine may already be familiar with the produce and delicacies on offer, but for the uninitiated, some of the dishes and ingredients may come as a surprise. Lyonnaise food is as no-nonsense and unforgiving as it gets, so caution and curiosity are advised. 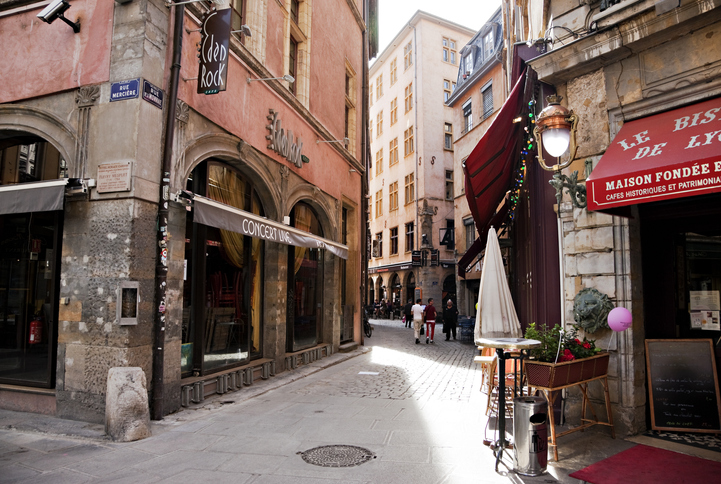 Art lovers will relish this cluster of boutique workshops, where Lyon’s up-and-coming artists congregate to sell unique pieces from their personal collection. Situated on the Croix Rousse pents, Le Village des Créateurs is a must-visit destination for anyone interested in Lyon’s emerging arts and crafts scene. Dedicated to showcasing the works of artists and designers from across the Auvergne Rhône-Alpes region, the centre sits in the heart of Lyon’s historic silk-weaving district, adding to its overall sense of heritage and prestige. Away from the art, craft and design spaces, there’s also a wonderful cafe-restaurant where you can refuel amid beautiful surroundings.

Lyon is celebrated for its silk production, and a number of original silk manufacturers still exist in the city today. While there’s no set Silk Quarter in the city, you’ll find several stores specializing in the sale of this elegant fabric; what better gift for a loved one back home than a ‘Made in Lyon’ handwoven silk scarf? The silk trade originated in Lyon from the 15th century, and rapidly became the city’s biggest source of income, with some 28,000 of its residents employed in the trade by the 18th century. By 1870, silk accounted for 75% of Lyon’s industrial activity, and the legacy lives on in the city’s multiple silk shops, as well as the Museum of Textiles.

A Glimpse into Lyon's Past

Founded by the Romans, Lyon is a city with an epic story to tell. Discover some of the key moments in the development of France’s second-city in our interactive timeline below.

Many travel to Lyon for its food alone, with the city’s bouchons and boulangeries offering classic fare that’s fabled across the globe. If you’re interested in finding out what the fuss is about when it comes to Lyonnaise cuisine, here are a handful of dishes to look out for.

One dish you’ll see on many menus throughout Lyon is cervelle de canut, a type of cheese dip made with local milk and flavoured with garlic and herbs. Interestingly, this simple cheese dip recipe harks back to Lyon’s silk worker’s community, as it was considered an affordable and readily available accompaniment to bread. A popular starter on the city’s boulangerie menus, cervelle de canut is delicious with a hunk of fresh bread and a glass of local wine.

Though not a specific dish, Lyon’s unique bouchons warrant a place on our shortlist for the unique dining experience they afford. Combining culinary heritage with a charming setting, these intimate eateries give you the chance to sample classic dishes from old-world France – each plate as uncompromising and distinctive as the last. Bouchons favourites include chicken liver salad, blood sausage and the bizarrely-named fromage de tête – or head cheese. If you’re looking for a true taste of the region, a bouchons is where you’ll find it. 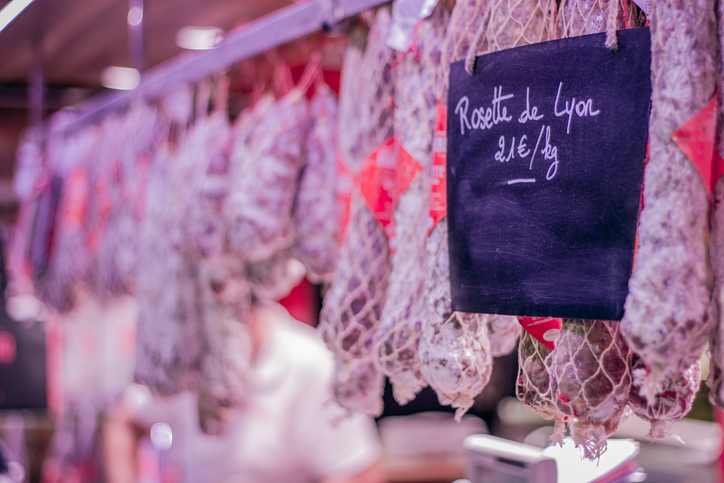 Saucisson, or sausages, are everywhere in Lyon, and they’ve had a major influence on the city’s culinary landscape over the years. Whether you’re in a bouchons, boulangerie, wine bar or food speciality store, you’ll often find sausages hanging from the roof, with the most popular being Rosette de Lyon – a garlic-infused variation that’s air-dried for six months to enhance its flavour.

History, culture and boundless discovery — what more could you ask for during an indulgent luxury river cruise? If you can picture yourself strolling the cobbled boulevards of Lyon, click here to visit the Scenic homepage, where you can browse all of our Rhône river cruises. Alternatively, call us on 0161 231 4901